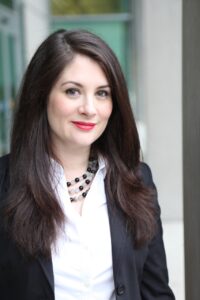 As a seasoned healthcare fundraising professional, she is passionate about building meaningful, long-term relationships with donors and supporters by connecting them to the world-class scientists and clinicians at BC Cancer. Her infectious enthusiasm, creativity, and empathetic leadership have resulted in the success of numerous campaigns and millions of dollars raised for cancer patients in B.C.

Prior to joining the BC Cancer Foundation, Robyn worked for Pace Group Communications as the Director of Conferences and Special Events where she provided strategic counsel to clients both in the public, private and non-profit sectors. In the past Robyn led a number of key projects including the TELUS Tour for the Cure, the Provincial Government’s Torch Relay Activation during the 2010 Olympics, the Canada Day Parade, the Rogers Santa Claus Parade and the 2011 Surrey Regional Economic Summit featuring Presidents William J. Clinton and George W. Bush.

Robyn, who previously worked in marketing and development roles for the BC Cancer Foundation from 2004 to 2007, has a Bachelor of Arts degree with a major in communication and a minor in political science. She was a recipient of the inaugural Association for Healthcare Philanthropy Top 40 under 40 Award.

In her free time, Robyn enjoys spending time with her husband Andrew, and chasing after their energetic young daughter Evie.

Director, Chair of the Investment Committee