They’ll also be running an in-store promotion for the month of May where a portion of proceeds from specific vitamins and supplements sold will be donated to the campaign.  And they’re also selling Inspire the World stars that customers can take home or display in the store. 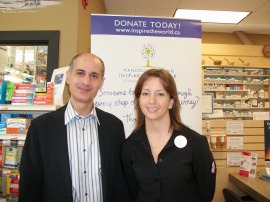 Bob Mehr with one of his employees, Kathryn Davies

So if you happen to live on Vancouver Island, click here to see a list of Bob’s pharmacies where you can take part in the special promotion.

The Inspire the World campaign is one of the top funding priorities for the BC Cancer Foundation right now.  This $10 million campaign will revolutionize treatment on Vancouver Island by literally bringing patient and family support, patient care and research together under one roof.

We’re more than halfway there – and we’ve had tremendous support from individuals and corporations – such as Bob Mehr.  So thank you for your support!