B.C.’s Conconi Family to Match Donations Dollar-for-Dollar up to $1 Million

VANCOUVER, B.C. – The BC Cancer Foundation and Robert L. Conconi Foundation announce an exciting opportunity that will see donations matched up to $1 million in support of an innovative new cancer treatment for B.C. patients.

Robert Conconi believes he owes his life to cancer research and the hard working scientists and clinicians at the BC Cancer Agency after successful cancer treatments years ago.

When Robert’s eldest son Alex learned of an emerging area of cancer research called immunotherapy, he was immediately drawn to the promise of harnessing the potential of a patient’s immune system to successfully eliminate every remaining cancer cell. 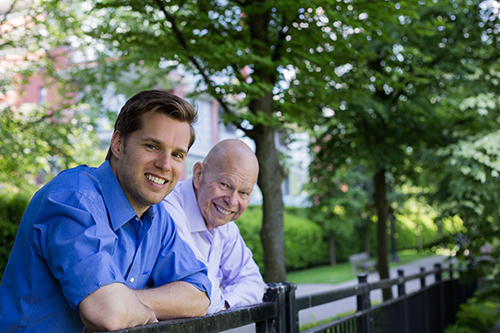 “We believe immunotherapy is the most promising and highly personalized new cancer treatment in development,” said Alex Conconi of the family’s commitment to match donations to the BC Cancer Foundation dollar-for-dollar up to an incredible $1 million.

A specific form of immunotherapy—adoptive T cell therapy— has been in development at the BC Cancer Agency’s Deeley Research Centre over the past decade under the leadership of Dr. Brad Nelson. The research team is in final preparations for clinical trials, which will require significant philanthropic funds to support the development of each custom T cell therapy.

Dr. Nelson explains: “Each patient involved in the Agency’s immunotherapy clinical trial will have a custom treatment developed using T cells from their own body. The T cells will be activated and multiplied so they launch a highly effective cancer destroying campaign once administered back into the patient.”

Over 25,000 British Columbians will be diagnosed with cancer this year, and thousands of those individuals will be facing advanced or recurrent disease for which immunotherapy provides a new treatment option.

“We hope British Columbians will join Alex Conconi and his family as they offer an incredible opportunity to match gifts to the BC Cancer Foundation and drive a breakthrough change in cancer care,” says Lou Del Gobbo, Interim President & CEO, BC Cancer Foundation.

The matching gift opportunity will run until October 22, 2015 to help launch clinical trials for a made-in-B.C. immunotherapy approach to cancer treatment. Make a gift online today at bccancerfoundation.com/conconimatch