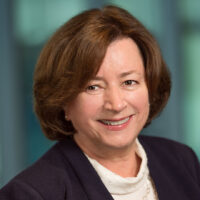 Alice Laberge is currently a corporate director of Mercer International Inc., Nutrien Ltd, Russel Metals and the Canadian Public Accountability Board (CPAB). She previously was chair of SilverBirch Holdings Inc. and a director of the Royal Bank of Canada, Delta Hotels, BC Hydro, Catalyst Paper and Fincentric Corporation.

In addition to her role as director with the Foundation, Alice is currently also on the Advisory Council of the Institute of Corporate Directors (BC Chapter).

Alice has been honoured with the PEAK Award for Lifetime Achievement from the Association of Women in Finance, received the Influential Women in Business Award and presented with the Institute of Corporate Directors 2015 ICD Fellowship Award.